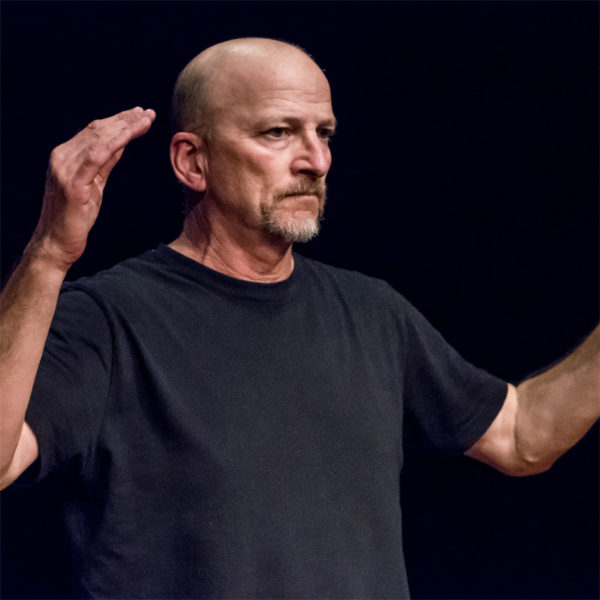 Equal Voices Arts were devastated to lose our beloved Shaun after he became ill very quickly with an un expectedly advanced cancer diagnosis. Before this time, Shaun was an artist of many media: an illustrator, storyteller, painter and graphic designer. He had performed in Deaf short films in Aotearoa New Zealand, winning best actor at the NZDSSF in 2013. He was an award winning NZSL storyteller, having performed all over New Zealand, winning awards in 1994, 2006 and 20011.

Shaun appeared professionally on the stage for the first time in 2015 in Equal Voices Art’s ground breaking, award winning show At the End of My Hands which was performed in both New Zealand Sign Language and English. He wowed audiences with his performances and following that, he was featured on TV in Aotearoa New Zealand.

Shaun went on to perform in the next Equal Voices Arts performance ‘Salonica’. Salonica was commissioned to go away on European Tour first, starting in the UK, then Serbia, then Montenegro, then home to Aotearoa New Zealand to start a nationwide tour there. A highlight of the European tour was performing at the National Theatre of Belgrade in Serbia to a full house. This show marked the first time a professional Deaf actor performed in his first language – NZSL, and the first time a performance was accessible to both Deaf and hearing communities, who came out in force in support.

We miss Shaun greatly, but his legacy inspires our work each and every day, and he is still with us on our journey onwards.